Back to: Seeds & Seed Potatoes 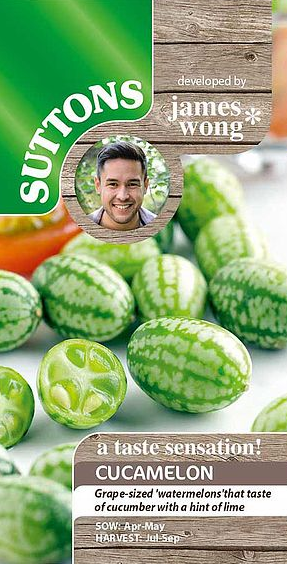 DEVELOPED BY JAMES WONG - James is an enthusiastic Kew trained botanist, RHS award winner, author and TV presenter who is renowned for thinking outside of the box when it comes to exciting and unusual fruit and vegetable varieties to grow at home.

Already a firm favourite amongst James' fans and gracing the dishes of many a TV chef, these tiny watermelons lookalikes have a refreshing flavour and bags of personality. Plus, their lush vines will produce masses of fruit throughout the summer with a ‘cucumber and lime’ taste, Ready when they are grape-sized and still firm to the touch. Try in salads, pickled whole, or why not explore their cocktail-enhancing prowess? Easy to grow. Vigorous climber/trailer. Pest and drought resistant. Origin: Mexico. Latin name: Melothria scabra.

These tiny watermelon look-a-likes from Central America are small enough to fit into a teaspoon, yet bite into one and the flavour is pure cucumber with a fresh tinge of lime. Popular since pre-Columbian times, these rampant trailing vines produce a constant stream of fruit throughout the summer, known in Mexico as ‘Sandíitas de Raton’, literally “Little Mouse Watermelons”. Despite their exotic origins and adorable appearance, they are much easier to grow than regular cucumbers. They are ignored by pests, resistant to drought & perfectly happy to grow outdoors in the UK, given a sheltered sunny site. Tastes like: Cucumber and lime.

Cucamelons can also be treated like a perennial providing you with fruit year-after-year. In late autumn once the fruiting period is over, lift the cucamelon's main radish like root and store in barely moist compost in a garage or shed over winter. Plant out again in early April to achieve early fruiting. Sow: April-May. Harvest: July-September.